A toy for big people 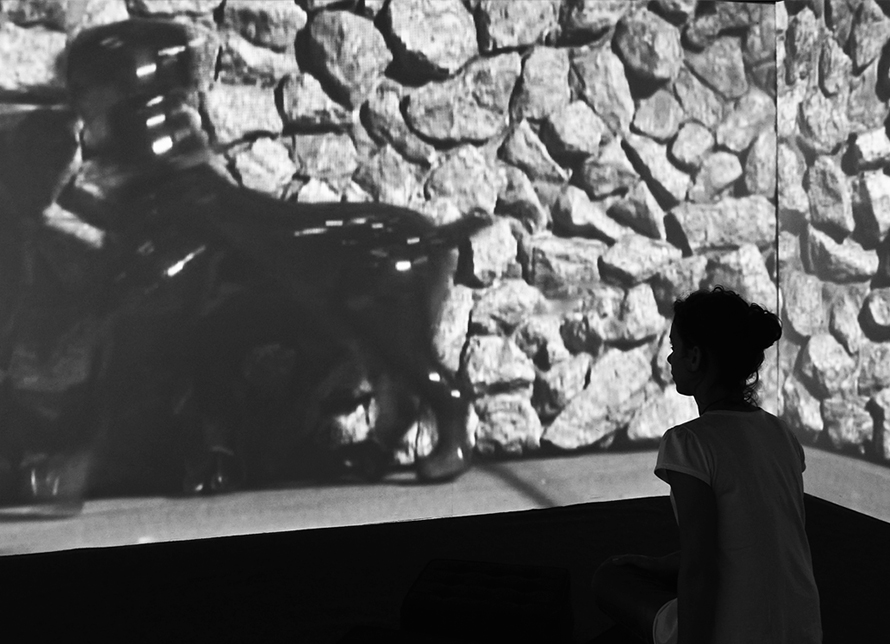 Redentor (Redeemer), according to the dictionary, is one who redeems, liberates, a saviour in other words. Using Redentorno as its title (a neologism which literally means the net, or web around, or surrounding ), the artist Juliana Notari presents a video-installation and photographs that together offer the spectator an opportunity to experiment with the sensation of an distinctive, spatially claustrophobic and mentally disturbing atmosphere, entirely monitored by the artist towards the compulsion for repetition, which, according to psychoanalysis via Freud, is undissociable from psychic automatism.
To the contrary of redemption, we have here the allegory of a prison, through a symptomatic compulsion which never proceeds in an independent manner, frequently linked, itself, to the compulsion to symbolism and to association.
When we go in, we begin to have the sensation of being the point of reference around which the little toy dog turns incessantly, and we thus become accomplices in this situation. How, then, can we not perceive that Juliana is playfully placing us in a trap?
Who, after all, is master of the situation, in this ‘pseudo dialogue’ that inevitably evokes a two-way relationship of power-dependence ?
If as children, we see ourselves as the centre of everything that surrounds us and we measure our imaginary kingdom according to the distance between ourselves and the object of our desires, through actions that alternate between joys, well-beiing, insecurities and fears, as we become adults and in the various social groups with which we are involved, this self-centredness remains as a motivation in our symbolic exchanges with everything and everybody.
Maturing is then to perceive that this same self-centredness lives in equilibrium with others, who we have to take into account. Thus we affect and let ourselves be affected, leading to a relationship in which the permanent conflict between the centric (space of repetition) and the excentric character (space of difference) is the necessary condition for balance in our being in the world.
This tension-charged struggle constitutes a vital force for the artístic imagination, as we see in the case of Juliana, because it symbolizes very well our daily effort to overcome the antagonism between the constituent forces of the pulsing of life, and death. At least until the battery runs out once and for all.