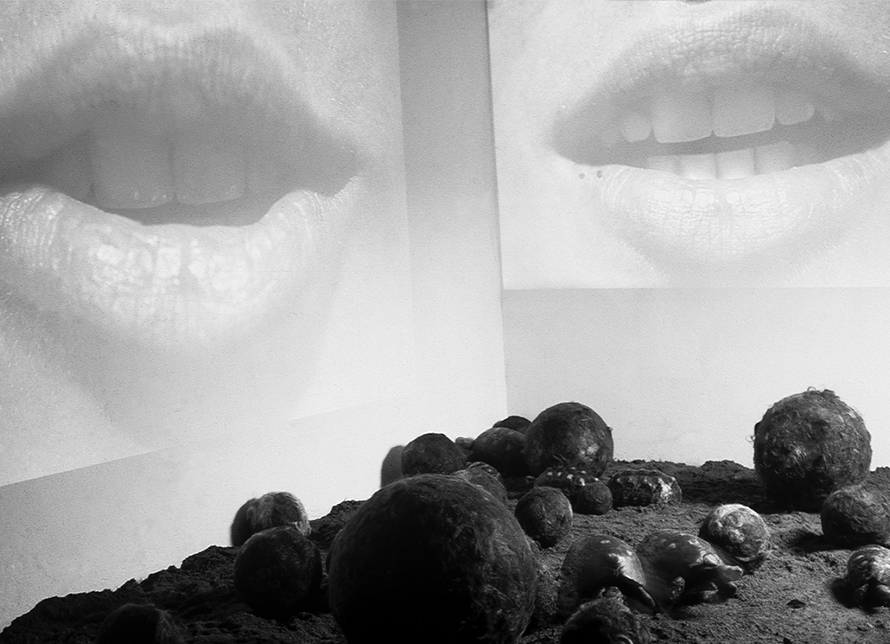 “Reason is the most superficial layer of conscience.”
Sônia Guedes Leal, A Poética da Agoridade.

A mouth uttering speeches, desynchronized from the lips’ articulation, in different languages (Russian, German, Italian…) and associated with tortoises and hair spheres to construct a video installation that presents the communication of incommunicability. In Verstehen, Juliana Notari creates a universe that can be deemed strange and incoherent at first, but a sharp look at the signs she inserted there allows us to risk some steps in the dancing interpretations suggested by the artwork.

The first aspect to draw attention, perhaps for being more visible, is the lips not being properly synchronized with the speeches of philosophers and writers spoken in languages so different from Portuguese and not that widespread in the rest of the world, which obviously makes it difficult—maybe impossible—for the audience to understand. There are several distinct speeches, ranging from passages read from Ulysses, a classic by James Joyce, to Jean-Paul Sartre explaining why he did not accepted the Nobel prize in 1964.

From the clash between what is not said and what in fact is said, derives the discomfort of not fully getting it, of not getting satisfied. This is somehow disturbing, because it takes from us the power we believe to possess. The hair-made spheres, lying still, and the tortoises asleep or moving slowly, stuck in the sand, can be seen as a metaphor of this traffic filled with obstacles. On the other hand, it is possible to ignore the hermetic armor when we shift our focus from the mouth to the whole, diving into the opening created by this interpretation exercise.

And, within this whole, the tortoises have a special meaning for being live organisms moving inside the artwork. They touch each other a lot and constantly have sex—and this suggests proximity. The tortoises also live secluded in their shells, implying reclusion and even detachment. Such cover is, however, a protection to them. The closings and openings of the tortoises are different from the mouth’s, since these actions are a perfect match to the kind of communication established between these animals, that is, without voice. Their organic circularity looks much more defined than ours. Would it be difficult for a tropical tortoise to understand a Russian one?

Together with the animals, the hair-made spheres that were also used in one of the artist’s previous works, Assinalações, complete the video installation. They are present to reinforce the virile aesthetics of the artwork by introducing another organic element out of control, since the cutting does not stop the growth. Besides, the spheres can be seen as a counterpart of the traffic between these elements, considering that they materialize immobility—the public’s initial state of mind.

Verstehen means comprehension in German. It has a foreign sound, which is modified every time it is pronounced. The idea of traffic presents itself again in the phonetic gears, passages, and trajectories extracted from the opening and closing of the lips that articulate in the opposite direction of the original pronouncing. In that sense, to say a word is the same as stepping in various possible grounds.