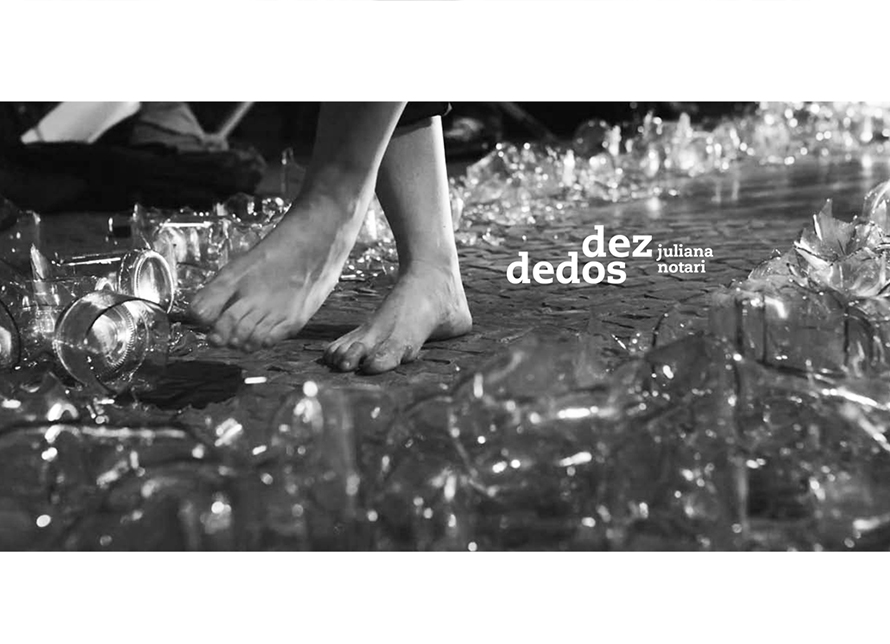 Throughout a decade, Juliana Notari has been making her way amongst shards —of all sorts, including glass ones. Executed four times in this period, the performance Symbebekos (2002) stands upon the artists career, making evident her ongoing process of transformation. The trajectory of Symbebekos, in addition to making us witness to the intense action in the performance—the path through a hall of glass—, also turns us into accomplices of the unrest and maturing process that are present in Notari’s work: to notice mutations in her work throughout the last years is to share it somehow. This is also the purpose of this book that presents the production and context of artist’s work in her first ten years. In the following pages, it is possible to take part in a life that constantly shows and recreates itself.

Considering art as a fertile land not to sublimate, but to fulfill desires, Juliana Notari has created a set of artworks that face her singularities, passing through biography, confession, catharsis and relational practices. By using several different focuses and modes of operation, traumas, desires, fantasies, and fears are re-inserted in performances, videos, installations, and objects, establishing relationships between subjectivities (specially through the links between artist-work-public), which, in turn, consist of the central axis in the artist’s work: “What urges me to create my works is the possibility of giving shape to my drives and desires, which, from the moment they come out to the world, allow me to get in touch with myself and the other.”

Therefore, to Juliana Notari, art is intimately entangled with a way of existing, which explains the two major forces of her work—language and body. While, specially at the beginning of her investigations, the powers and, in particular, the fragilities of language when it comes to communication worried the artist (as in Verstehen or Inneresteren, commented by Guto Melo), along the years this initial precedence of language is joined by the inalienable power of the body and the sensitive experiences that, as such, cannot be reduced to the communication model. In that sense, the idea of language is re-implanted in her work, widening the skeletal concepts of the initial works (examined by Carlos Lopes): much less interested in pointing out what existence has of incomplete nature, Notari’s work starts to suggest situations in which the existence is intensified, as Maria do Carmo Nino indicates in her text. Such is the case of Aslude or Redentorno, for example, whose circularity, while referring to a sensation of exhaustion and passive repetition, consists indeed of experiences that activate unique sensibilities.

In such transformation process, it should be noticed the endurance of the exuberant plasticity that marks part of the experiments in Juliana Notari’s work. Ever since the Assinalações series—in which the artist carried on several experiments with hair—, a striking materiality creeps in among animals, earth, fire, food, glass, blood, also displaying gestures of organic nature in the drawings that cover the dolls of Inneresteren or in the traces that proclaim her daily life in the Diário de Bandeja (cap. 2) series. Such plastic sensibility turns itself, later on, into concreteness intimately linked to the body, filled by weights (Aslude), forces (Dra. Diva), and tensions (Symbebekos)—creation power indicators for Notari, to whom the libertarian dimension of art can go through the exploration of the body limits.

Approaching several questions of subjectivity, otherness, and the contemporary social dynamics—specially those of psychoanalytic nature, as shown in the text Canibalizar-se, the artist’s testimony to the creation of Symbebekos, or Ricardo Resende’s reflection on the Spalt-me series, referring to the debate about feminism—, by pursuing a relationship of proximity between subjectivities Juliana Notari’s work gives life to distinct ways of complicity. Far from the harmonious coexistence of differences, it is a work that explores the conflicts and wickedness of the relationships, deriving from this terrain the tensions, the fuel for her creation.

Also accomplice to ambiguities stirred when facing the discomforts of subjectivity, this book goes through the major interests and concerns in Juliana Notari’s production, which were previously contextualized by texts written at the time the analyzed works were created and now are put into perspective from the viewpoint of the ten years of transformation assembled together. Therefore, the book goes beyond the artist’s work to become a record of a specific space-time: besides the desired universality, it is also possible to catch a glimpse of thoughts and experiences shared by artists and critics contemporary (and many from the same state) with Juliana Notari. This is because—as an accomplice—the artist’s trajectory is also part of the history of the art produced in the Northeast of Brazil, a region that clearly went through a process of densification and metamorphosis in the first decade of the 21st century. This complicity, in all its complexity, is hereby equally presented.