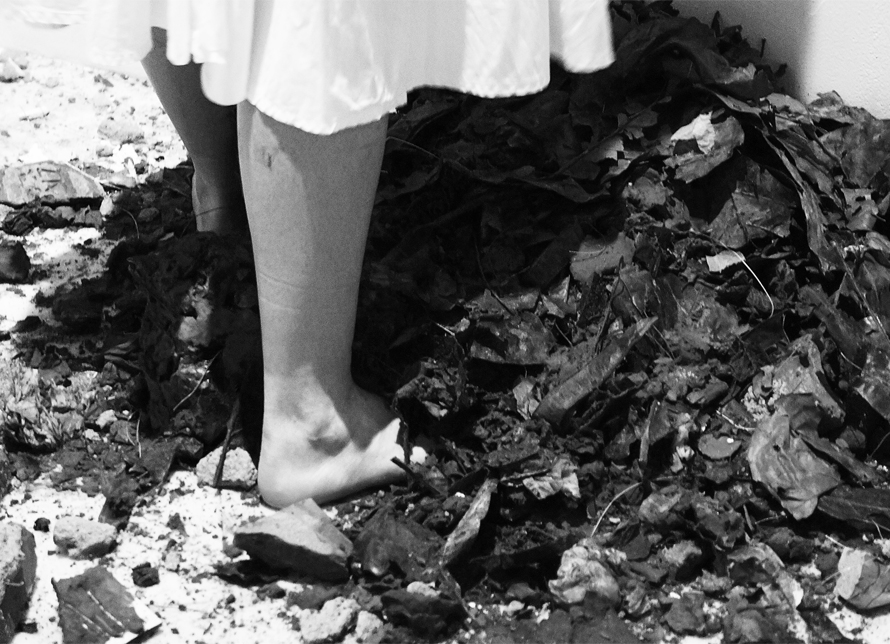 Spalt-me is an urban scale large printing that makes an allusion to the cavernous inside of a vagina. If we do not consider its shape, it may also remind us of the Rorschach inkblots used in psychological evaluations, also called self-expression method, developed by the Swiss psychiatrist Hermann Rorschach. But the image—which came from the performance Dra. Diva, in which the artist literally tore the wall apart, then made it bleed by forcing a vaginal speculum into it—refers, in fact, to the female body, providing what resembles the inside view of a huge uterus.

This artwork also reminds us of a well-known modern art painting: The Origin of the World (1866), by Gustave Courbet (1819-1877), depicting part of a woman’s body whose genitals is covered by a thick layer of pubic hair. Being a small oil on canvas painting, approximately 18 x 21 inches, it shows a close-up on the naked woman’s genitals and abdomen, laid on the bed with her thighs spread, completely exposing her vagina without the slightest trace of sensuality. At the time, the painting caused a scandal—and still today some people find it odd. It is on public exhibition in the Musée D’Orsay, in Paris, since 1995. Even the psychoanalyst Jacques Lacan, one of the first to own it, felt difficulties to show it because of its explicit nature.

Juliana Notari, in turn, goes even further when she brings to the streets, printed on the front of a building, an image that has the same impact as the one used by the French painter. An image that can be seen from a somewhat abstract perspective. It is and it is not at the same time. It may be a super exposure of female genitals or the abstract image of the Rorschach inkblots, confusing the observer at first. The artist brings the image to the city in a huge scale, as if she wanted us to remember the origin of the world by exposing in front of our eyes a picture with such depth in spite of being flat on an average building wall.

The act of using such an image, which can cause unfamiliarity and visual—and possibly moral—impact, allows for several different interpretations, as we have seen. However, in nowadays’ cynical society—which transforms the woman into a merchandising object and makes her body look unnatural, in which sexuality has been vulgarized and even her womb can be rented to generate life on demand—, life has become trifling and everything stands on the razor-thin line between human and capital ethics. It has yet another meaning: by bringing this at first abstract and visually suggestive image, as mentioned, to the urban scale landscape, Juliana Notari seems to call the attention of people passing by—or even “aggressively” throwing in their faces—to a question about the origin of the human being. Precisely, it puts us in front of a demystified image of the uterus, of the origin of the world that occurs inside the woman’s body.

This “cave” is an obscure sight of the place where the mystery of life’s reproduction happens.